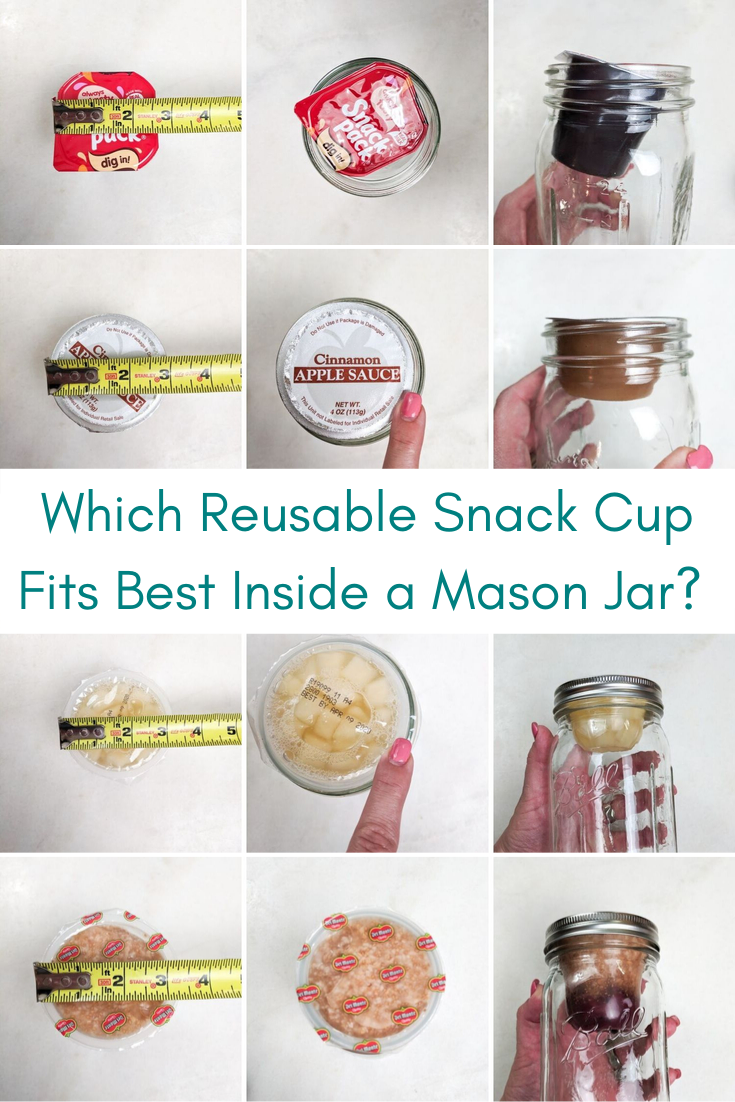 It’s no secret that we love to make yogurt parfaits in mason jars.  We also love to include granola.  However, we like our granola to stay crunchy until we are ready to eat.  The solution is to have a small cup that fits inside a mason jar to keep the granola nice and dry until it’s time to snack.  An easy mason jar hack is to use a reusable snack cup as the container. 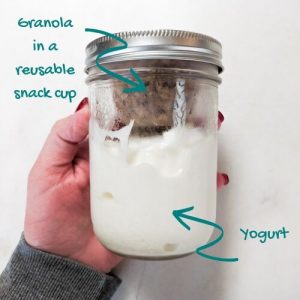 Which Snack Cup Fits Best Inside a Mason Jar?

Since snack cups come in a variety of sizes and brands, we want to make sure that the one we choose will get the job done right.  We decided to test four different sizes of snack cups to determine which is the best fit.  Or do they all fail?  (Spoiler alter: There is more than one really good option!) 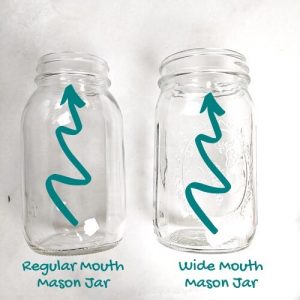 First, let’s define the size of hole we are trying to fill.  Mason jars come in various sizes but have two different sizes of mouth opening: the regular mouth and the wide mouth.

We want a snack cup that fits into the inside opening, but has a sufficient rim to sit on top of the jar.  Also, we don’t want the rim of the snack cup to be so large that we won’t be able to screw on a standard metal band. 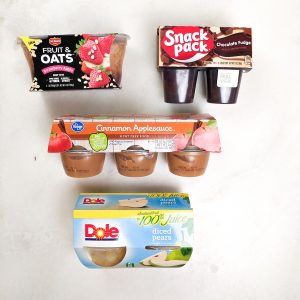 The Snack Cups We Tried

We looked at four different kinds of snack cups to see which would be the best fit.  Each of them was measured and tested within the two different sizes of mason jars.  The four options included: a pudding cup, an applesauce cup, a fruit cup and a Fruit & Oats cup from Del Monte.

The pudding cup is the smallest of the four cups we tried and it obviously isn’t a good candidate for the wide mouth jar.  It measures just over 2.5 inches across which is smaller than the wide mouth inside measurement.  You can see from the photos it falls inside the wide mouth jar and doesn’t sit on top.

None of the other snack cups worked with a regular mouth mason jar.  So if regular mouth is your go to, the pudding cup is your best option.

The applesauce cup measures about 2 7/8 inches across, which is smaller than the 3 inch outside diameter of a wide mouth mason jar.  You can see in the pic that there is a gap between the rim of the cup and the jar.  As a result, the cup doesn’t quite sit flat on the jar, but it won’t fall in either.

The applesauce cup will do in a pinch, but isn’t the ideal option for a wide mouth mason jar because the contents could easily leak.

The fruit cup we tested was the Dole brand for pears. There are other brands with identical cups and other types of fruits.  This one measured in at 3 1/8 inches across.  It fit really well in a wide mouth mason jar.

There was a tiny gap between the rim of the cup and the jar that became evident when you moved the fruit cup to one side, but it wasn’t bad.  The fruit cup is a great option to pack extras in your mason jars.

The Oatmeal and Fruit Cup by Del Monte

The last cup we tested was the Del Monte Fruit & Oats cup.  These cups are brand specific.  Our store didn’t have anything similar from another brand, but there were some Fruit & Chia cups from Del Monte that were the same shape.

The Del Monte Fruit & Oats cup measures 3 1/4 inches across.  It fit the jar best without any gap!  It was easily the snuggest of the bunch and felt like it wouldn’t wiggle at all.

The one downside to the Del Monte Fruit & Oats cup is that it is significantly taller than the others, so you might not be able to fit as much in a jar below the cup, especially if you are using a pint rather than a quart.

There you have it!  There are three reusable snack cups that work quite well with mason jars.

The fruit cups and the Del Monte F&O cups are ideal for wide mouth jars.

We hope this was helpful!  Let us know what you think in the comments.

What Else Can You Do in a Mason Jar?

If you love using mason jars in your kitchen, check our our list of 56 Ways to use Mason Jars in the Kitchen.  It’s FREE to download from our shop and we know you will love all the ideas to maximize your favorite glass jars!